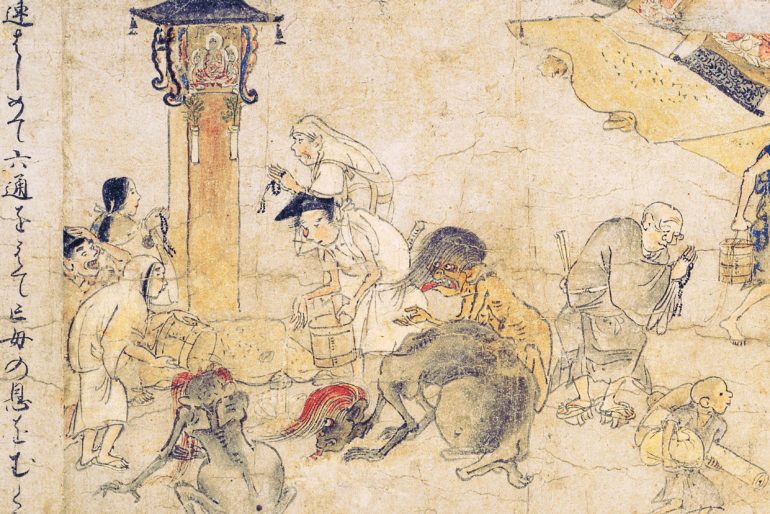 In China, Hungry ghost Festival or Yu Lan Jie (盂蘭節) celebrated 15th of every 7th lunar month is one of the three “ghost” festivals when living have chances encounter visitors from lower realm.

All three festivals – Qingming Festival, Double Ninth Festival and Hungry Ghost festival are very important to Chinese people, since Chinese believes that dead have continued existence and can influence fortune and wellbeing of the living.

Hungry Ghost festival is different from other two – because only that day gates of hell are open, permitting all hungry ghosts receive food and drink from living. Living offers food and other ritual items to their deceased ancestors, and hope to receive favours in return.

Roots of this festival, as believed by many, are originated in Buddhism and Taoism, hence most of the rituals performed by Buddhist or Taoist monks at temples or specially built altars. Rituals performed by monks including distributing ritual offering, burning incense and signing ghost songs – rites that believed only the ghosts can understand.

When food offered at home – whole family gathered together at festive dinner and every deceased family member gets his own seat and his share of dishes.

Ghost money (金纸 jinzhi or 冥币 mingbi), also known as joss paper or hell banknotes – printed paper resembling money and decorated with stamps or engraved designs. There are different types of hell banknotes for different categories of spirits, one is offered during Hungry Ghost festival is silver variety given exclusively to ancestral spirits. Offering wrong kind of ghost money can upset ghosts of ancestors even more and bring bad luck upon family.

Some of the ghosts are friendly and some are quite angry, especially those who newer given a proper ritual send-off or those, who was simply forgotten. So families pay tribute to all known and unknown ghosts just to make sure prosperity and ward off bad luck.

Other class of hungry ghosts is evil doers,  punished and destined to wander forever until priest will eventually send it to hell.

Strange Tales from a Chinese Studio

Spirits are treated rather with distance, as in most cases people believe that they are dangerous. Chinese is rather prefer to stay at home after dark, and don’t come close to open water – as it believed that after sunset ghosts are roaming the streets and can possess

living or lure them into water and drown them.

On the 14th day of festival people lit small flower shaped lantern and set them outside of their hoses or small floating boats and release them to the rivers, just to make sure ghosts can find their way back to underworld.